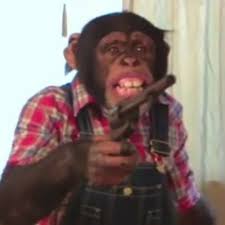 I cannot even begins to explain how peeved off I is about this gosh damn coronyvirus. This was supposed to be ‘da year, the one where I fulfilled my ancestry’s tradition.

You see, I is a hunter. My daddy was a hunter. His daddy was a hunter. His daddy’s daddy was actually a banker, but he dids some huntin’ on the side. And every one of them had a piece of game that took ‘em their wholes life to conquer. My daddy’s daddy’s daddy had this three-legged antelope that’d eat from his cucumabumber patch until he finally gots it in the rear with a bow and arrow. My daddy’s daddy shot him an abnormally-sized grizzly bear—I’m talkin’ 2 stories tall, 3/16ths stories wide. He had to get him because the bear done took hostage his wife, my granmammy, for at least four and a half fortnights. My granmammy told me she survived her hostage sitchamuation by playin’ Old Maid with the bear, but always losin’ on purpose to makes the bear feel in charge. And my daddy… well, he killed a man. But not just any man, it was a giant rat man he told me was named “Chuck E. Cheese”.

This year, I was finally gonna’ get my game. But then all a sudden they come out with this new virus outta’ Silicon Valley that broadcasts the swine flu into your bloodstream and now I gots to wears face underwear wherever I go, and now I won’t be able to shoot the Snoopy balloon at the Macy’s Parade because you can only attend by the picture box.

Ever since that Thanksgiving morning in 1994 when I decided to glue my clothes hanger to the static machine and I saw the image of that big white dog floating in the sky, I knew my destiny. I even made one of those gamblings with my childhood friend Terophenes, but everyone called him “Pheeny”. Pheeny said to me that he would be able to put together a high school marching band and get them to hoist him on a hang glider as a parade balloon while the instruments blasted AC/DC “Thunderstruck” before I woulds a been able to shoot a bullet into the Snoopy dog.

Now I knows what your thinkins in your noggin right now. “Well if alls you wanted to dos is assassimanite the Snoopy dog, why didn’t you just bring a gun to the Macy’s Parade?” And this is what separates me, a hunter with gemerations of prestige, and you—the man, woman, child, legal counsel readin’ this.

I already tried that.

Turns out, Snoopy’s got security. And these NYPGs says to me that they’re the only people allowed to carry guns in the parade. Of course this concerned me, because game recognizes game and I do not want one of those LMNOPs bein’ the ones to shoot the Snappy dog instead of ME. So I decided to join the force.

I spent half a score plus three months goin’ through the training programs learnin’ all ‘da ins and outs of police officers—from how you never honk the police horn because that initiates the car to transform into one of those Humvee military tanks, to how if you bring Rudolph Giuliani a microwaved croissant with cream cheese and butterscotch he will lick it off your hands like feedin’ a carrot to a racehorse. However the NYPGA banned me from using handcuffs after I tried to arrest a fire hydrant for loitering.

Fast a maforward to now, where I am an officer at the NYWMD and now also a licensed gun carrier at the Macy’s Parade, but now unable to be in attendamance. Seems a little comvenient that these two things happamened at the sames times. Almost as if ‘da Snoopy balloon caught wind of ma’ scheme and hads it security detail whip up some thing to stops me in my tracks. I wouldn’t puts it past that big brainy balloon dog, that’s for sure.

Worst of all, I was recently inform-ed that Pheeny done got together that high school marchin’ band and a hang glider! Ons ‘da plus side, the marchin’ band ain’t allowed to play the AC/DC song because they cans broadcast the virus outs their instruments, so I haven’t lost the bet yet!